2018 served up a smorgasbord of disparate patent law developments in Canada. Most notably, ratification of a new trade agreement negotiated amongst Canada, the United States and Mexico would require introduction of a patent term extension system and lengthening of data protection for biologics. Entirely separate from this, the second federal budget bill for the year introduced a series of amendments to the Patent Act, dealing with diverse matters such as licensing commitments on standard-essential patents and the role of the prosecution history in claim construction. Late in the year, a wholly revised version of the Patent Rules was published for public consultation, largely geared toward implementing the Patent Law Treaty in Canada, an initiative having its genesis in the second federal budget bill of 2014.

This article provides our readers with a summary of highlights from 2018, including links to our previous articles. In addition we have prepared a separate summary of notable patent decisions from the Canadian courts from last year, which you can read here.

The renegotiation of the North American Free Trade Agreement last year received a great deal of press in Canada.  While originally described domestically by the US-driven abbreviation “USMCA,” the Canadian government has since adopted the more mellifluous acronym “CUSMA.”

Data Protection for Biologics - Although not a patent issue per se, a closely related expansion of IP rights is the requirement for extension of the data protection term for biologics from the current eight years to ten.

While agreement on CUSMA has been reached in principle, it must still be ratified by all three countries.

In Canada, the steps required for ratification and implementation of CUSMA include tabling of the treaty in Parliament for 21 sitting days; preparing an Order in Council by Cabinet authorizing  the Minister of Foreign Affairs to sign an Instrument of Ratification; and passing of a bill implementing the treaty by Parliament.

The United States administration must submit a list of changes to US law needed to accommodate passage of CUSMA within 60 days of signing it, or by January 30. It then must submit to Congress the final text of the implementing legislation and a Statement of Administrative Action 30 days before the bill is formally introduced.  Meanwhile, the International Trade Commission must report to the President and Congress on the economic impact of the trade agreement within 105 days of the signing of the agreement. Progress on this has been delayed by the ongoing US government shutdown.  Once the implementing legislation is introduced in Congress, the House and the Senate will have 90 days to approve it by simple majority vote.

In Mexico, CUSMA is subject to ratification by simple majority vote in the Senate.  In addition, Annex 23-A to CUSMA imposes obligations on Mexico to implement reforms to its labour laws.  Such reforms have been tabled in Mexico’s Congress, but Congress is not expected to consider them until February.

Until then, the current NAFTA remains in force.  Any party may withdraw from NAFTA upon giving six months' notice, which President Trump has suggested he may do in order to put pressure on Congress to implement CUSMA more quickly.

More on CUSMA is provided in our article USMCA v NAFTA: What's changed and what it means for IP in Canada.

Each year, the federal government typically enacts one or two omnibus acts, implementing provisions of the federal budget tabled in Parliament in the spring. The second budget bill of 2018, enacted as the Budget Implementation Act, 2018, No. 2, made a number of significant changes to the Patent Act:

These are particularly interesting changes in that they seem to be driven by the domestic agenda, as they are not required for compliance with a trade agreement or in connection with ratification of an international IP treaty.

A draft of entirely revised Patent Rules was published for public consultation in December. Many of the changes concern compliance with requirements of the Patent Law Treaty, which is to be ratified by Canada.  We anticipate that the new Patent Rules might be in force later in 2019, although this is not known with certainty.

Particularly notable changes in the proposed Rules include the following:

Our article Canada's new Patent Rules: twelve notable changes and tips expands on these and other points.

Further developments in many of these matters can be expected in 2019 and perhaps beyond. The necessary legislative amendments to provide for patent term adjustment and extended data protection for biologics presumably will not advance without ratification of CUSMA. The new Patent Rules appear to be in close to final form, but require final publication in the Canada Gazette Part II before coming into force, so additional changes remain possible. With respect to the Budget Implementation Act, 2018, No. 2, the provisions concerning standard essential patents, experimental use, and demand letters all are subject to further elaboration through regulations, yet to be made. 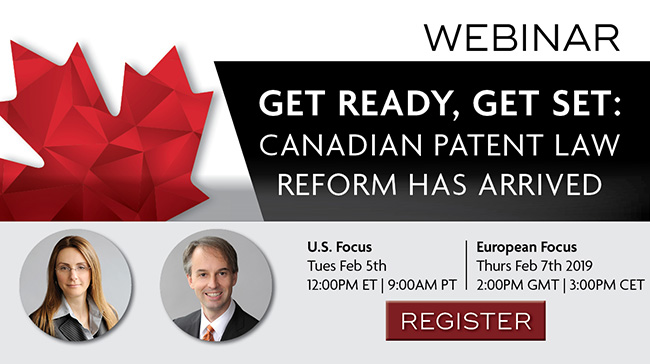