The Trolls have arrived: Suspicious trademark applications on the rise

In the wake of the 2014 announcement that the Canadian Trademarks Act would undergo significant overhaul, there was much speculation about how the changes would impact the behaviour of those filing trademark applications in Canada. A prevailing theory was that the removal of the current requirement to claim or declare use of a mark prior to registration would lead to an influx of baseless “trolling” applications by entities seeking to secure rights in trademarks which they have no intention of using.

In some scenarios, “trolls” (or “squatters”) apply for trademarks that are used by brand owners in other countries with the goal of forcing those owners to negotiate with the trolls when they enter the new market. In light of Canada’s use-based trademark system, this has not been viewed as a serious problem. However, with the announcement that the trademark amendments will eliminate the use requirements, there is a risk that trolls might set their sights on Canada. This was theorized in the past, when the initial draft amendments were circulated and we warned about the possibility of “trolling” in Canada in our April 7, 2016 IP Update and offered strategies on how to guard against it.

While the implementation of the amendments has been delayed and it is now anticipated these will come into force in early 2019 (see our February 12, 2018 IP Update), new data shows that seemingly baseless applications are already on the rise.

As part of the amendments to the Act, Canada will be adopting the Nice classification system, which categorizes all possible goods and services into 45 separate classes. In 2015, the Canadian Trademarks Office began accepting applications filed by class, although this continues to be on a voluntarily basis.

In 2017 there was a sharp increase in the number of applications filed in all 45 classes. Trademark applications listing all 45 classes immediately evoke suspicion since it is unlikely that any one individual or business has a genuine intention of using a trademark in association with every type of good and service. 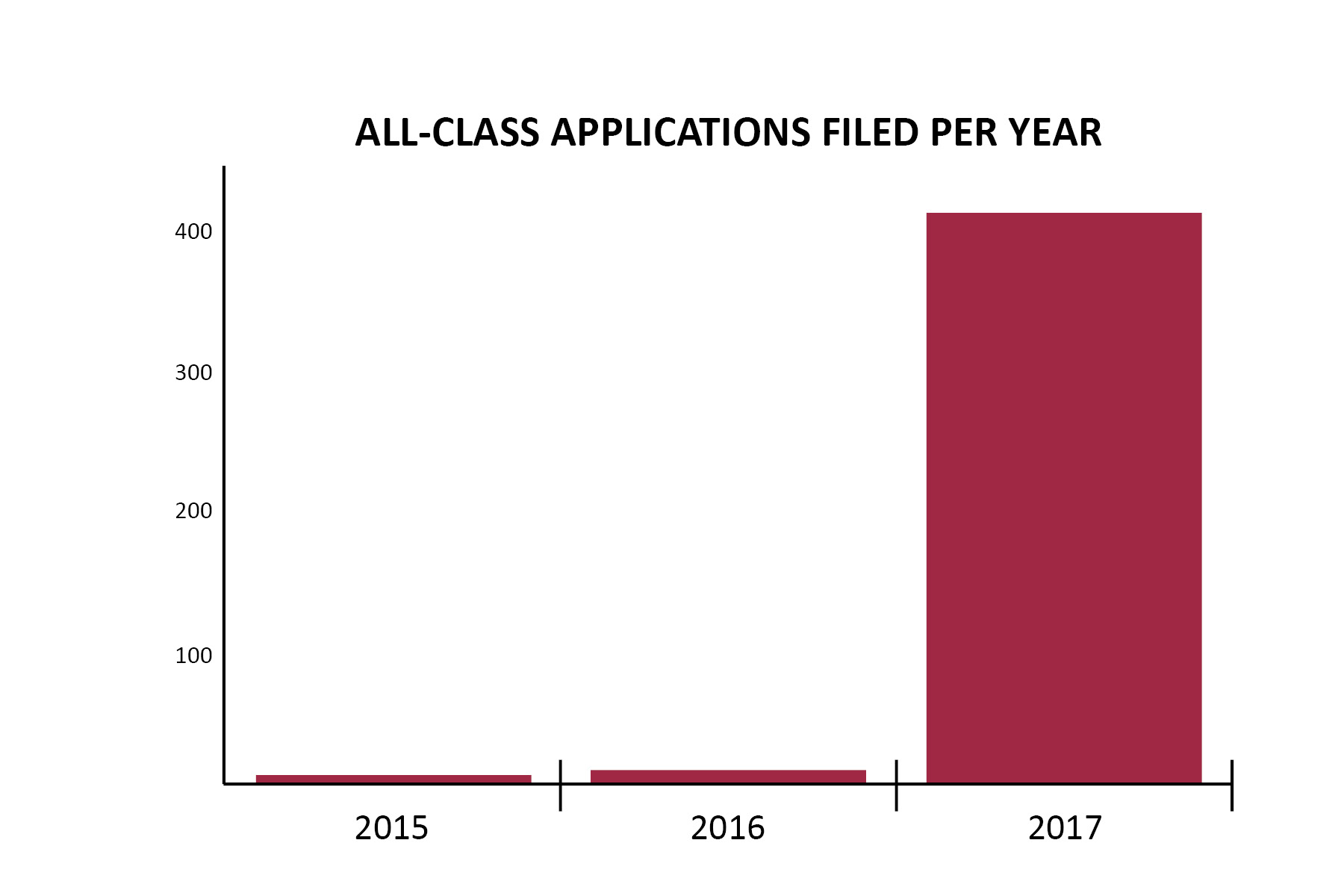 While the ultimate intentions of these trademark trolls are unclear, this activity is troubling and is already creating problems for brand owners. There have been many instances of these “troll” applications being cited against the legitimate applications of brand owners. Overcoming these citations can be difficult.

Since the amendments have not yet come into force, it begs the question: why have the trolling activities already started? There are two reasons.

First, all of the applications mentioned above were filed based on proposed use in Canada. Currently, applicants who file based on proposed use must eventually declare that they have used the mark in Canada prior to obtaining a registration. However, once the amendments are implemented, it will no longer be necessary to file any declarations of use. Both trademark trolls and legitimate brand owners alike have been employing this strategy in anticipation of the changes.

Second, Canada does not currently have a per-class filing fee. Rather, the fee to file a trademark application is the same whether it contains one class or 45. However, once the changes are implemented, Canada will adopt a fee-per-class system. As a result, there are significant cost advantages to filing a multi-class application now rather than waiting until the amendments come into force.

As the implementation of the amendments approach, we will undoubtedly continue to see an increase in trolling activity.  Accordingly, it is important for companies to review their Canadian portfolios now to ensure that all important marks are protected, whether by filing new applications or maintaining existing registrations. Similarly, foreign brand owners should be proactive in filing applications in Canada as soon as (or even before) they contemplate entering the Canadian market.

It is also important to regularly monitor the Canadian Trademarks Office database to identify trolling applications as soon as possible, so that more options are available to defeat them. Since the trolls have already arrived and appear to be more sophisticated than the few previously seen in Canada, brand owners should be prepared to engage in oppositions and expungement proceedings in order to protect their trademarks.

For further information regarding protecting your trademark rights in Canada, please contact a member of our firm’s Trademarks group.