Smart & Biggar prevails at trial on behalf of Diageo in trade dress case.

On June 12, 2017, the Federal Court issued its 99-page decision in Diageo Canada Inc v Heaven Hill Distilleries Inc et al, 2017 FC 571.  The Court found Heaven Hill and its Canadian broker Diamond Estates liable for passing off their ADMIRAL NELSON’S rum products as those of Diageo and for infringing and depreciating the goodwill attaching to Diageo’s CAPTAIN MORGAN character and label trademarks. 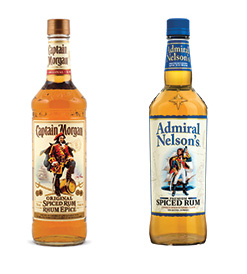 The decision is a reminder of the clear benefits of registering key character and label elements on product packaging as trademarks. The Federal Court’s decision also demonstrates that trade dress protection is alive and well in Canada and joins a rather limited amount of jurisprudence where a defendant has been found liable for depreciation of goodwill of a registered trademark.

Diageo is the Canadian subsidiary of Diageo plc, one of the world’s largest producers of spirits, and sells several varieties of CAPTAIN MORGAN, Canada’s best-selling rum. As shown below, all varieties bear a label containing a fanciful depiction of Sir Henry Morgan, a 17th century privateer.

Heaven Hill, the 7th largest alcohol supplier and the largest independent family-owned and operated distilled spirits producer in the U.S., sells its five ADMIRAL NELSON’S rum varieties with a label having a fanciful depiction of Vice Admiral Horatio Lord Nelson, a British naval officer in the late 18th and early 19th century.

Diageo successfully established that Heaven Hill had passed off its ADMIRAL NELSON’S rum products as those of Diageo. The Court held that the evidence adduced by Diageo at trial showed that there was considerable goodwill associated with the CAPTAIN MORGAN brand, and that there was confusion and deception of the public due to Heaven Hill’s trade dress as it was a misrepresentation as to the source of its ADMIRAL NELSON’S rum products. In so doing, the Court held that Diageo’s survey demonstrated that the percentage of people interviewed who were confused was not insignificant and was higher than the rate of confusion the Court had previously found to be sufficient to establish a likelihood of confusion.

Depreciation of the value of the goodwill

In addition to passing off and trademark infringement, Diageo asserted the Canadian equivalent to “dilution”---i.e. that Heaven Hill had depreciated the value of the goodwill attaching to Diageo’s registered marks. The Court  held that, while Heaven Hill had not actually used any of Diageo’s CAPTAIN MORGAN character and label trademarks, Heaven Hill’s ADMIRAL NELSON’S composite trademark was directly competing with nine of Diageo’s trademarks in the market for rum products in three Canadian provinces, and that these trademarks were sufficiently well known to have significant goodwill. As a result, Heaven Hill’s use of its character and label trademarks in association with ADMIRAL NELSON’S rum products was likely to depreciate the value of the goodwill associated with Diageo’s registered trademarks.

The Federal Court also dismissed Heaven Hill’s counterclaim for abuse of process and for damages for allegedly false and misleading statements made by Diageo in a press release at the commencement of the lawsuit.