2021 offered many lessons to Canadian trademark owners including: reminders of the challenges of enforcing inherently weak trademarks and the importance and benefits of registering IP rights at the Canadian border. As well, amid ongoing delays at CIPO, brand owners now have options for expediting examination of Canadian trademark applications.

In this article, we look back at key developments in Canadian Trademark practice during 2021 and highlight a number of notable Canadian trademark cases and decisions.

In one of the more notable trademark decisions of 2021, the Federal Court of Appeal affirmed the Federal Court’s trial decision holding that kitchenware brand Pampered Chef had not infringed Loblaws’ PC marks.

Loblaws, Canada’s largest retailer, uses the well-known word mark PC and the PC script mark below (collectively, the “PC Marks”) for a wide range of goods and services, including grocery, kitchenware, and household products:

In 2015, the defendant, Pampered Chef, adopted a family of marks that included the logos below:

At trial, Loblaws alleged that Pampered Chef’s use of its short-form logos infringed Loblaws’ registered rights in its PC Marks. As previously reported, the trial judge concluded that confusion was unlikely.

The Court of Appeal agreed with the trial judge that there was no likelihood of confusion, observing that:

Pampered Chef was successfully represented before the Federal Court of Appeal by Smart & Biggar LLP. See our full article discussing this decision.

In one of the first trademark decisions of 2021, the Federal Court of Canada confirmed that road names can be clearly descriptive of a place of origin.

The case involved two wineries operating on Locust Lane, a road in the Canadian province of Ontario. Both parties used the term LOCUST LANE in association with their wine.

The applicant, Hidden Bench, had been using LOCUST LANE in association with wine or vineyard services for almost two decades. LOCUST LANE was used in combination with other words, such as “Locust Lane Vineyard” and “2013 Locust Lane Pinot Noir”.

The respondent, Locust Lane Estate Winery Corp. (“LLEW”), was founded in 2019 and began using its name to market its wines and related services.

The applicant claimed that it owned the unregistered trademark LOCUST LANE, and that LLEW’s use of the mark constituted passing off.

The Court found that the applicant was unable to establish the requisite goodwill in order to found a claim of passing off. The Court held that the LOCUST LANE marks were clearly descriptive of the place of origin and lacked inherent distinctiveness. In such cases, it is typically very difficult to succeed in a passing-off action without evidence of secondary meaning (namely, a very significant reputation).

The court also focused on the fact that the applicant’s LOCUST LANE marks were always displayed together with the more distinctive and prominent HIDDEN BENCH house mark, and further that LOCUST LANE was always displayed in black font on the bottom half of the label and surrounded by other text about the wine or winery.

This case emphasizes the risk of choosing geographically descriptive trademarks. The case also highlights the benefits of registering secondary trademarks to avoid a court giving less weight to an unregistered secondary brand appearing together with a more dominant house mark.

See our full article “Locust Lane: Can a road be an enforceable trademark?” about this decision.

This decision, involving brands in both the emerging cannabis and traditional fast food sectors, serves as a reminder of the dangers of adopting parody marks that piggyback on the reputation and goodwill of established brands.

Subway IP LLC (“Subway”) is the owner of the well-known mark below, which it uses in connection with sandwich restaurants:

Budway, Cannabis & Wellness Store (“Budway”), a cannabis retail store in Vancouver, BC, adopted the following mark in association with its business:

Subway brought an application in the Federal Court of Canada (a more streamlined proceeding than an action) for trademark infringement, passing off, and depreciation of goodwill (or “dilution”). The Court agreed with Subway, awarding permanent injunctive relief, damages, and costs.

After considering all of the surrounding circumstances, the Court concluded that there was a reasonable likelihood of confusion, adding that “the context makes it perfectly clear that [Budway has] adopted their mark by deliberately drawing on the famous mark of [Subway].”

Notably, the parties’ goods overlapped in the present case (with respect to foodstuffs and edible products), unlike in the 2020 parody case Toys “R” Us (Canada) Ltd v Herbs “R” Us Wellness Society, where the cannabis products offered by the respondent and the toys of the applicant were considered fundamentally dissimilar, such that there was no finding of a likelihood of confusion.

This trademark decision is a reminder that the use of genuine branded parts can be offside, particularly where, as here, they are incorporated into a new product.

The applicants, H-D USA, LLC and Harley-Davidson Canada LP (together, “Harley-Davidson”) own the word marks HARLEY-DAVIDSON and H-D for use in association with, inter alia, motorcycles and a variety of motorcycle parts (the “HARLEY-DAVIDSON Mark” and the “H-D Mark,” respectively), as well as the logos depicted below:

The respondent, Eli Varzari (“Varzari”), was advertising a custom-built electric bicycle, depicted below, as the “Harley Davidson Willie G Edition” and the “Harley Davidson Edition,” noting that the handgrips and axle bolt covers, which bore the H-D Mark and the Skull Design Mark, respectively, were “original parts from the factory.” 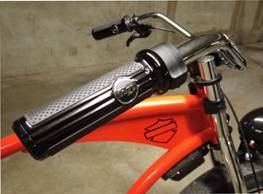 Harley-Davidson brought an application in the Federal Court alleging infringement, passing off, and depreciation of goodwill, which the Court granted in its entirety, awarding permanent injunctive relief, damages, and costs.

According to the Court, “no extensive analysis is needed” to find infringement because there is “little doubt a casual consumer somewhat in a hurry viewing [Varzari’s] electric bicycle… would infer it was manufactured or sold by or under license of Harley-Davidson.”

The Court found Varzari’s incorporation of genuine handgrips and axle bolt covers bearing Harley-Davidson’s well-known marks into his custom electric bicycles to be infringing. While the resale of lawfully acquired trademarked goods is not, itself, prohibited (according to the principle of exhaustion), “Varzari is not simply reselling motorcycle parts… he is altering them and incorporating them into a new good in such a way that the new good, the bicycle, bears the trademark and thereby suggests an association with [Harley-Davidson].”

In terms of passing off, Harley-Davidson relied on unregistered rights in a particular shade of orange. The Court held that colour can constitute an enforceable trademark, noting that, since the amendments to the Trademarks Act came into force in 2019, a “trademark” is defined as a “sign” that explicitly includes a “colour.” As the evidence showed that Harley-Davidson used a particular orange shade to distinguish its goods from those of others, it could form the basis for a passing-off claim.

In terms of depreciation of goodwill, the Court was easily satisfied with respect to the requisite “mental linkage” between the parties and their marks, stating that “all signs point to… linkage being exactly what Varzari was trying to establish and profit from in selling his electric bicycles.”

This case, involving both trademarks and copyrights, serves as a useful reminder of anti-counterfeiting measures available to brand owners, and the benefits of recording brand rights with the Canada Border Services Agency (“CBSA”).

Nintendo of America Inc (“Nintendo”) obtained default judgment against the Defendants for both trademark and copyright infringement based on documents obtained from the CBSA, which had detained the infringing goods at the Canadian border.

The Court found that the Defendants had imported video game consoles containing unauthorized copies of at least three of Nintendo’s works. The consoles were provided with external packaging and a printed games list that bore marks confusingly similar to Nintendo’s marks. The relief included, among other things, a permanent injunction, damages of $8000 for each of the four infringed trademarks and statutory damages of $20,000 per registered copyright.

Nintendo was successfully represented before the Federal Court by Smart & Biggar LLP. For more details on protecting your brand at the border, see our previous article “How to record your brand’s rights and stop counterfeit goods at the Canadian border”.

This notable trademark decision serves as a practical reminder to brand owners that simply registering a mark does not eliminate the need to consider prior use of unregistered marks.

Both parties used their respective marks in association with similar goods and services.

The Court found that there was a likelihood of confusion between the respondent’s 2017 registered mark NORSTEEL and the applicant’s decades’ old, unregistered trademark and trade name NORSTEEL BUILDING SYSTEMS. The Court found that the respondent’s trademark registration was invalid because it was not distinctive and because Toti was not entitled to register the mark since NORSTEEL was confusing with the applicant’s prior-used unregistered trademark and tradename.

This case serves as a good reminder for brand owners to consider the Canadian marketplace before they launch new products and/or apply to register trademarks. One available tool is a marketplace search, which can help a brand owner assess the likelihood of confusion with unregistered brands of others. If you are considering filing a Canadian trademark application or launching a new brand, we encourage you to reach out to the authors or another member of our Trademarks & Brand Protection team to learn more.

The request for expedited examination must be accompanied by an affidavit setting out the specific circumstances for the request. Recent experience has shown that, where the affidavit satisfies the criteria, CIPO is able to swiftly grant such requests and examine the application within a week or two from the filing of the affidavit. No government fee is required.

2. Measures to improve efficiency in examination

On May 3, 2021, CIPO published a Practice Notice titled Measures to improve timeliness in examination, outlining the following practice changes:

To improve efficiency, CIPO broadened the list of acceptable telephone amendments for simple prosecution issues. As of February 19, 2021, Examiners are now permitted to call an Applicant, or their Canadian trademark agent, directly to discuss the following deficiencies, instead of issuing a formal Examiner’s Report:

Upon receipt of a telephone objection, the Applicant (or their agent) has five business days to provide a written response to address the deficiencies identified. If this deadline is not met, a formal Examiner’s Report will issue.

See our article “ CIPO broadens the list of acceptable telephone amendments in trademark prosecution in Canada” discussing this change in practice.

For more information on the notable developments and decisions discussed in this article, please reach out to the authors or any member of our Trademarks & Brand Protection team.