UPDATE: On November 23, Innovative Medicines Canada and a number of pharmaceutical companies commenced an application for judicial review of the final Guidelines.  See also the PMPRB’s November 20, 2020 webinar slides here.

As briefly reported here, on October 23, 2020, the Patented Medicine Prices Review Board (PMPRB) published the final version of its Guidelines. These Guidelines operationalize the amendments to the Patented Medicines Regulations scheduled to come into force on January 1, 2021 (see our article here). The Guidelines state they are not binding and may be revisited by the PMPRB “in light of experience and changing circumstances”.

This article provides a brief summary of the final framework for the price review process and highlights changes relative to the June 2020 draft Guidelines (reported in detail here). See also the PMPRB’s October NEWSletter for the PMPRB’s overview of the final changes.

Patented medicines will be categorized as one of:

The overall price review process for New medicines is described in this schematic (and remains largely unchanged from the June 2020 draft): 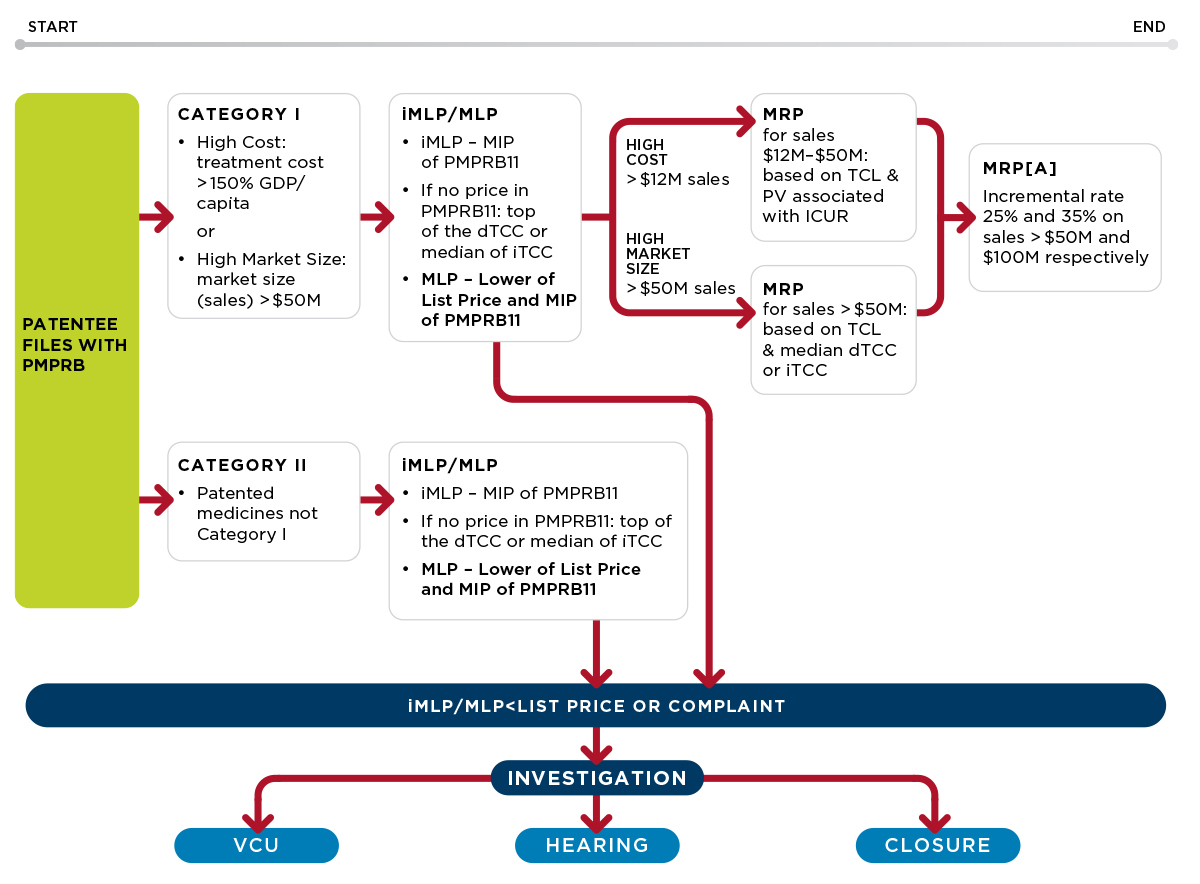 The Guidelines outline a two-step process for the price review of new medicines.

In the second step, following the defined interim period, the iMLP will be replaced by the maximum list price (MLP). The MLP will be the lower of the list price and the MIP.  If PMPRB11 prices are not filed by the end of the interim period, the MLP is set by the lower of the list price and the top of the dTCC and as above, if no domestic therapeutic class comparators are available, the MLP may be set by the median of the iTCC.

Grandfathered and Line Extension medicines will be subject to an MLP, but not an iMLP. The MLP for such medicines will be the lower of (i) the highest international price (HIP) for the PMPRB11 countries, or (ii) the medicine’s ceiling (e.g., the non-excessive average price (NEAP)) under the February 2017 version of the Guidelines. Patentees must comply with the MLP within one reporting period of the MLP being set for Line Extension medicines and within two reporting periods for Grandfathered or Gap medicines.

Gap medicines will be subject to an iMLP assessed in the same manner as an iMLP for New medicines.  The MLP for Gap medicines will be the lower of (i) the MIP for the PMPRB11; or (ii) the medicine’s ceiling (e.g., the NEAP or the maximum average potential price (MAPP)) under the February 2017 Guidelines.

The Guidelines also provide a number of circumstances in which categories (i.e., whether a medicine falls into Category I or Category II) or price ceilings may be reassessed.  For example, for New medicines, a reassessment may be conducted if the medicine is approved for a new indication or its cost-utility analysis is updated.  Also by way of example, a Category II medicine receiving a new indication may be re-categorized to Category I if it meets the Category I screening criteria.  As a further example, for Grandfathered medicines and their Line Extensions, if the prevailing HIP is lower than the MLP for two consecutive reporting periods, the MLP will be reset by the prevailing HIP.

Under the June 2020 draft Guidelines, patentees of Category I medicines were required to ensure that the medicine’s average transaction price in Canada is no higher than the MRP ceiling, failing which the price may be subject to additional review or investigation by the Staff.

Pursuant to the final Guidelines, investigations into Category I medicines “will only be triggered by the patentee’s failure to comply with the iMLP or MLP”, although the Board may consider MRP or MRP[A] in the context of such an investigation.

In its October NEWSletter, the PMPRB attributed this change to the June 29, 2020 Federal Court decision invalidating subsection 3(4) of the Amendments (reported here), which would have expanded price calculation requirements to include information beyond the first point of sale including third party rebates.  The Newsletter notes that the PMPRB may revisit this approach based on the outcome of the pending appeal of the decision.

Various minor changes were also made to the MRP calculation. Most significantly, the Pharmacoeconomic Value Threshold (PVT) used to calculate the MRP and MRP[A] of Category I medicines was reduced from $150K per quality-adjusted life years (QALY) to $100K per QALY for Level IV medicines (i.e., medicines which provide no or slight improvement relative to other medicines sold in Canada).

Reassessment for Grandfathered and Line Extension medicines limited to HIP

MRP may be decreased OR increased based on market

The June 2020 draft Guidelines would require a decrease to the MRP in response to increased sales, but had no corresponding provision to increase the MRP to account for decreased sales. Under the final Guidelines, the MRP may be increased back to the MLP if sales fall to $12 million or less for High Cost medicines, or to $50 million or less for High Market Size medicines.

New patented vaccines will only be subject to a price review and investigation if a complaint is received by the PMPRB.

Guidelines will be subject to parliamentary scrutiny

On October 26, the House of Commons Standing Committee on Health announced that it would undertake a study of the final Guidelines. The Committee has invited stakeholders and individuals to submit requests to appear before the Committee and written submissions to the Clerk of the Committee no later than November 6, 2020.

Should you have any questions, please do not hesitate to contact a member of the Life Sciences Regulatory & Compliance Group.