The recent decision of the Federal Court of Appeal in Sport Maska Inc v Bauer Hockey Corp (2016 FCA 44), provides clarification on the applicable test for leave to intervene in proceedings before the Federal Court. The underlying case is also a reminder that businesses can request by way of a simple and inexpensive procedure that registered trademarks of their competitors be removed from the Register if no longer in use.

In this case, Reebok-CCM sought leave to intervene in proceedings commenced by Bauer Hockey Corp. in the Federal Court to appeal the Registrar’s decision to expunge the trademark registration for their well-known design mark SKATE’S EYESTAY. The Federal Court of Appeal seized the opportunity to discuss the applicable test for leave to intervene in the Federal Courts, and upheld J. Harrington’s decision (2014 FC 853) affirming the Prothonotary’s Order (2014 FC 594) to dismiss Reebok-CCM’s motion.

Bauer is the owner of the well-known design trademark referred to as the SKATE’S EYESTAY Design (depicted below), registered on November 3, 1989 under no. TMA361,722. 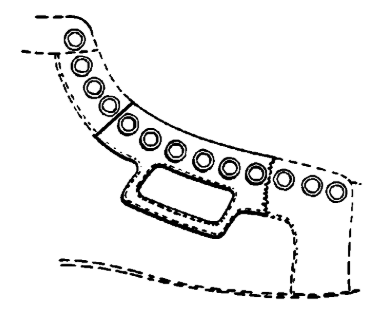 On January 11, 2010, Easton Hockey (one of Bauer’s main competitors at the time) caused the Registrar of Trademarks to issue a notice pursuant to section 45 of the Trademarks Act, requiring Bauer to show, by way of an affidavit or a statutory declaration, that the mark was used in Canada in the three years preceding the notice.

On April 5, 2013, the Registrar rendered a decision expunging Bauer’s trademark registration. On June 11, 2013, Bauer filed a Notice of Application with the Federal Court to appeal from the Registrar’s decision. Easton Hockey was named as Respondent in this appeal as required by the Rules. However, on April 15, 2014, Bauer and Easton reached an agreement by which Easton undertook, amongst other things, not to contest Bauer’s above mentioned appeal. It is only then, almost ten months after having learned of Bauer’s appeal and after Bauer and Easton had reached a settlement, that Reebok-CCM sought leave to intervene despite the fact that it was already challenging the validity of the trademark registration in other proceedings pending before the Federal Court.

The Federal Court of Appeal and 3rd party intervention

Until recently, the Federal Courts have generally considered a list of six factors established by the Federal Court of Appeal in 1990 in determining whether a 3rd party intervention is appropriate (the Rothmans test). However, on January 29, 2014, J. Stratas, sitting as motions judge for the Federal Court of Appeal, issued a decision in the case of Canada (A.G.) v Pictou Landing First Nation (2014 FCA 21), wherein he noted that it was “time to tweak” those factors and provided a somewhat recast list.

Bauer argued that both tests were essentially equivalent and that, in any case, the list of factors was not meant to be exhaustive. Reebok-CCM, on the other hand, asserted that J. Stratas had effectively changed the test and that the existence of other efficient means to submit a question to the Court was irrelevant to the analysis.

On the issue of the applicable test, the Federal Court of Appeal noted that the minor modifications made to the test in Pictou Landing did not warrant a modification of the factors held to be relevant in Rothmans as those were not meant to be exhaustive. The Court indicated that the test for leave to intervene should remain flexible as every intervention is different. The Court also held that the Rothmans factors were well tailored for the task at hand and that the Pictou Landing factors were “simply an example of the flexibility which the Rothmans factors give to a judge in determining whether or not, in a given case, a proposed intervention should be allowed”.

As for the factors applicable to the case at bar, the Court first noted that Reebok-CCM’s motion was actually not a motion to intervene but rather a motion for Reebok-CCM to replace Easton as respondent in Bauer’s appeal. The Court held, following one of its recent decisions, that the rules for intervention ought not be used to substitute a party.

The Court also indicated that there is a public interest component to proceedings brought pursuant to section 45 of the Trademarks Act, the purpose of which has been said to remove “deadwood” from the Register of Trademarks. However, the Court of Appeal agreed with the Federal Court judge that this public aspect did not elevate Bauer’s appeal to a level comparable to cases that “affect large segments of the population or raise constitutional issues”. As such, the public interest component in section 45 proceedings is, in itself, insufficient to justify a competitor’s intervention every time a decision rendered in the context of section 45 proceedings is appealed to the Federal Court of Appeal.

While the Court held that Reebok-CCM would be directly affected by the outcome of Bauer’s appeal of the Registrar’s decision considering that Bauer is alleging the same trademark registration against Reebok-CCM in parallel infringement proceedings, the Court came to the conclusion that preventing Reebok-CCM from intervening would not cause any significant prejudice other than the loss of the tactical advantage it had sought to gain with its proposed intervention.

Lastly, in the particular circumstances of this case, the Court agreed that the previous agreement between the parties whereby Reebok-CCM undertook and agreed in 1989 not to object to Bauer’s use or registration of the trademark at issue, and the existence of parallel and ongoing litigation between the parties were relevant considerations in determining whether intervener status ought to be granted.

In conclusion, this decision is useful to clarify the applicable test for leave to intervene in proceedings before the Federal Courts following the decision in Pictou Landing. It also serves as a reminder that a section 45 notice is a relatively simple and inexpensive procedure that a business can consider to challenge a competitor’s registration for a trademark that one believes has not been used as registered for at least three years. In that regard, the Court noted that Reebok-CCM could also have requested that the Registrar issue such a section 45 notice to Bauer at any time, but it chose not to do so.

For further information on patent prosecution, please contact a member of our firm’s Trademarks group.